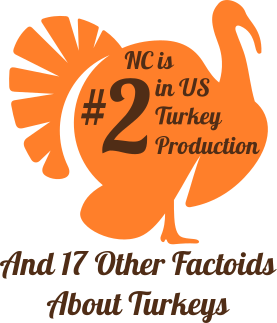 You can fry it, roast it, smoke it, cook it upside-down or even in a bag. But regardless of how you fix it, the centerpiece of most dinner tables this Thanksgiving will be a turkey. We were planning to give a brief history lesson of how turkey became the America’s Thanksgiving staple but apparently it is a matter of much debate, so we’ll steer clear. However, we will take the opportunity to show our appreciation to the hardworking farmers that provide this delicious Thanksgiving centerpiece every year by highlighting the importance of this commodity to our state with some great facts. So this year while shopping for that perfect turkey be sure to think about our turkey producers and maybe share a few of these fun facts around the table.