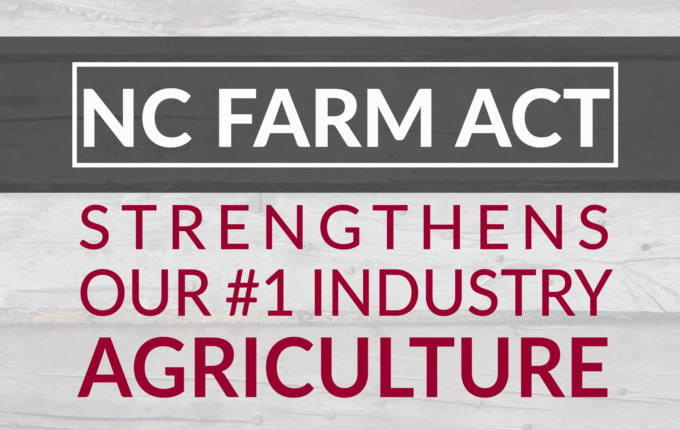 In the past, the Farm Act has addressed wide-ranging aspects of agriculture including transportation, legal liability, deregulation, clarifying terms and interpretation of federal laws, amongst many more.

This year’s Farm Act is sponsored by Senators Brent Jackson, Andrew Brock, and Norman Sanderson. Three of the bill’s major provisions include:

Agritourism in North Carolina has blossomed over the past few years. According to the current county zoning statutes, agritourism activities are considered “bona fide farm” activities and are exempt from county zoning regulations. However, there is uncertainty about whether events like weddings and receptions held on farms should qualify as agritourism. To provide more clarity, the 2017 Farm Act would require all agritourism operations seeking bona fide farm exemptions be in possession of either a state-issued qualifying farmer sales tax exemption certificate or be enrolled in the state’s present use value program. If one of those requirements is met, any activity that takes place on that particular farm for recreational, entertainment, or educational purposes, including weddings and receptions, will be exempt from county zoning rules. In addition, the bill also clarifies that farm buildings that are used for agricultural activities are exempt from the State’s Building Code rules, even if they are used for public or private events.

North Carolina’s swine industry is one of the largest in the United States, and it’s a heavily regulated industry as well. In addition to state and federal regulations, North Carolina statute currently allows for counties to enforce zoning regulations on swine operations that keep more than 600,000 pounds of live animals on the property. But the state’s de facto moratorium on building new swine operations and its siting act render the county zoning provision duplicative and obsolete. The Farm Act would strike that provision from existing law.

Farm trucks weighing more than 26,000 pounds are required to have a USDOT number and company name displayed on both side of the vehicle. A statute change in 2012 removed the intrastate farm exemption that had prevented farmers from having to comply with this requirement when their trucks were only used within the state. While DOT registration is free, it is just another example of the administrative burden farmers must deal with for vehicles that may only be on the road a few months or weeks out of the year. Farmers should be more concerned about the weather and crop prices than if they have the correct sticker on the side of their truck. The Farm Act of 2017 will reinstate the intrastate farm exemption.

North Carolina has a rich agricultural tradition, and despite the growth of other industries in our state agriculture remains the state’s leading economic driver. That’s why the Farm Act is such an important piece of legislation, and one that North Carolina Farm Bureau supports wholeheartedly.