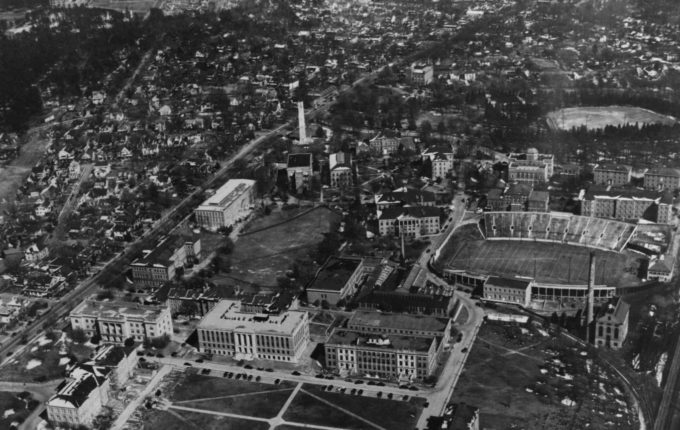 1. That’s alot of land you have, Federal Government.

Yes, indeed. Approximately 2,265,625 square miles in 1860, or about two-thirds of the entire country. Enough to give away tons of land to railroads (the Pacific Railway Act of 1862), and to pioneers (the Homestead Act of 1862) – promoting transportation and settlement of the west. So why not promote education too?  And the kind of education that would seem most useful in these frontier regions especially – promoting agricultural and mechanical learning.

That’s exactly what the land-grant college idea was about. But it didn’t mean giving away land on which to build colleges devoted to a practical higher education. It meant giving the states a grant of land they could use to fund those colleges – whether by selling it and helping to establish an endowment, or using the continuing proceeds of these lands – from mineral or timber rights, for example.

By 1860, the land-grant idea had been kicking around for a couple of decades – gaining support at the state level, and even being implemented in Michigan and Pennsylvania. In 1855, the “Agricultural College of the State of Michigan,” later Michigan State University, and the “Farmers’ High School of Pennsylvania,” later Penn State, became the first land-grant colleges in the nation.

At the federal level, Rep. Justin Smith Morrill of Vermont was on the case. He’d already put forward a land-grant college bill in 1857, allocating public lands to the various states largely on the basis of population, and committing the institutions founded under it to pursue an agricultural or engineering curriculum – though “without excluding other scientific or classical studies.” The bill eventually passed in Congress, but was vetoed by President James Buchanan on grounds of constitutionality.

Rep. Morrill resubmitted the Act in 1861, with a not-so-insignificant change in light of the Civil War: the colleges would teach “military tactics” too. Again the bill passed in both houses of Congress, and the new president, Abraham Lincoln, signed it into law on July 2nd, 1862.

The Morrill Act gave states 30,000 acres of public land per senator and representative, to sell or manage as it saw fit, and use the proceeds to establish school endowments. Iowa was the first state to accept the Morrill Act’s terms, transforming its already-established “State Agricultural College and Model Farm” into a federal land-grant institution: what would become Iowa State University. But the first brand new college founded under the act was Kansas State University.  And many more followed!

To get the bill passed, Morrill and his allies had worked out allocation formulae that rewarded the more populous states with more public land to fund their colleges. But these primarily Eastern states didn’t necessarily have that much public land within their own borders. So they got to pick and choose public land elsewhere. This worked out really well for the state of New York, which chose land in Wisconsin that provided Cornell University with a lucrative source of timber income for years to come…

5. Wait a second, some land-grant colleges are also private schools?

Cornell?  Isn’t that a private school? Yep! Land-grant institution does not always equal public school. Cornell was founded in 1862 as a private institution, gaining some of its income from the land-grant, in exchange for fulfilling certain curriculum requirements in the agricultural and mechanical arts. Other already existing private institutions gained land-grant status after passage of the act, including Brown, the Massachusetts Institute of Technology, and even Yale (or part of it, at least – the Sheffield Scientific School). So land-grant schools are everywhere we look!

6. Thanks for the acres!

Ultimately, over 17.4 million acres of public land was distributed through the Morrill Act of 1862 – generating nearly $8 million to establish land-grant institutions.  This was a lot less of a land giveaway than the Homestead Act (288 million acres) or the several railroad acts (about 143 million). But like these other policies, it had an enduring impact on the nation’s landscape, and the lives of its citizens.

Here’s the link to the original post by Back Story Radio. Be sure to check out their podcasts and blog posts for more historical perspective.

If you’re wondering about the back story on North Carolina’s two land-grant universities, NC State and NC A&T, we’ve gathered a few links that you might find interesting.

For a map of all of the land-grant colleges and universities in the US, click here.