share tweet
Wednesday, February 10, 2016 Connect NC: What You Need to Know, Other Than to Vote Yes
By First Furrow Staff
State Government 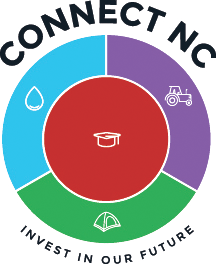 The Connect NC bond is coming to a ballot box near you on March 15th! That’s right, the $2 billion bond referendum will be on the ballot when you vote in North Carolina’s primary election. Some of you probably know a little bit about the bond, but many of you may not.

So what is the Connect NC bond, why do we need it, and how does it work?

The Connect NC bond is a way for the State of North Carolina to raise money to build, repair or improve facilities at the State’s universities and community colleges; National Guard training facilities; state parks and the zoo; and finance sewer and water infrastructure projects. There’s also significant funding for agriculture research and laboratory facilities, which is the main reason we support the bond. We’ll get into the specifics of those two agriculture projects in future posts, but for now you’ve got the basic idea: the bond helps the state secure the money needed to complete these capital projects.

Why does the state need to undertake these projects? Put simply, North Carolina is a growing state with growing infrastructure needs. Since 2000, about 2 million people have moved to the state. This means more people going to school at our universities and community colleges, visiting our parks, or needing help from our Guard troops when there’s a hurricane or other natural disaster. These people also benefit from the expansion and improvement of utilities like sewer and water systems. In short, there are more people living here and the state needs to catch up.

So how does the Connect NC bond work, and why is it the right time to complete these projects? In some ways, the state operates just like you run your household budget. The state has expenses such as paying teachers, funding Medicaid, and running various state agencies. You have expenses too: paying your rent or mortgage, buying groceries, and keeping the lights on and the water running. When you have to take on a major project—say you need $10,000 for a new roof—you might consider borrowing the money, because you probably don’t have the cash available to cover your monthly expenses AND drop 10-grand on a roof.

The bond works pretty much the same way. The state sells bonds to investors, uses the money for capital projects, and then pays it back at a specified time. Basically, it allows the state to provide services while making big, capital investments that will benefit everyone in the long run. Governments aren’t the only entities doing this either; businesses, including major corporations, do this all the time to keep their bank accounts full while taking risks on expansion or research.

Now that we’ve got that out of the way, why should you vote for this bond? Here are 3 reasons.

Remember that roof that needs some repairs? It’s a big ticket item and unless you’ve been saving up for it, you probably need to borrow the money. Well, you’re in luck. The bank has told you they’re willing to loan you the money you need at a historically low interest rate. And because you’ve been so good at paying back your debts in the past, taking the loan won’t ding your credit score.

Just like most other interest rates, bond and treasury rates are about as low as they’ve been in the last half century. And North Carolina is one of only nine states with a Triple-A rating from all three major rating agencies, meaning the state has managed its debt well and it has an extremely strong capacity to meet financial commitments. In fact, last week, NC Treasurer Janet Cowell released a statement saying “North Carolina has maintained a conservative posture on debt and has the ability to responsibly invest in its future—and keep the ‘AAA’ bond ratings if the Connect NC bonds are approved.”

Back to the house. Your roof is falling apart. What are your going to do?

You won’t have to find new revenue, and you can keep your monthly budget in check. With the state’s rapidly growing population and need for new infrastructure, state leaders chose option three. They weren’t going to defer maintenance or raise taxes to create new revenue.

According to former NC Budget Director Lee Roberts, “The Connect NC Bonds are well within our existing affordability and do not require a tax increase of any kind.” (Source: connect.nc.gov)

Finally, the projects included in the bond are important investments for North Carolina, especially as it relates to our agriculture economy. In fact, they’re so good that we’re going to dedicate an entire post to them next week.

Most of you have probably already requested your absentee ballots so that you can VOTE YES for the Connect NC bond. But for the rest of you, we’ll see you next week.