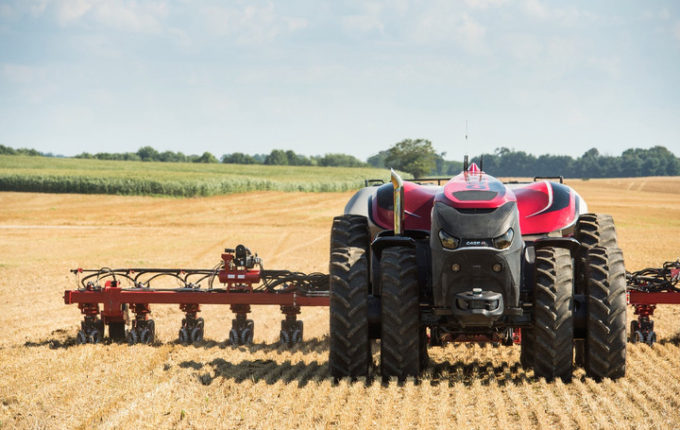 Self-driving cars have been a hot topic for the past couple of years or so, with companies like Google, Uber, and Tesla doing some serious work to advance the autonomous vehicle concept. But despite the attention and the progress that’s been made, the world of driverless cars is still at least a few years away.

Meanwhile, out in the fields of rural America, farm equipment has been driving itself for the better part of two decades. Companies like John Deere, Case IH, Autonomous Tractor Company, and New Holland have been developing auto-steer and GPS-guided equipment that has helped define the future of precision agriculture. Want to see it in action?

The technology works using information from a variety of sources: some systems use GPS; some use radar, lasers, and other wireless communication systems on other farm equipment and strategically placed transponders; and sometimes an operator provides initial guidance to get the equipment on course.

The benefits of precision agriculture and self-driving tractors are many, but four major ones come to mind: Accuracy, Efficiency, Productivity, and Safety.

This blog gets its name from the idea that the first furrow a farmer plows needs to be straight and well-planned so that subsequent rows make the most use of the land. Equipment that uses navigation technology ensures all rows are straight and precisely plowed, making work easier for the farmer later in the season. Because the equipment knows exactly where the plants are, it won’t drive over them.

Efficiency goes hand-in-hand with accuracy when it comes to precision agriculture and goes beyond the efficient use land. Precise seeding guards against overcrowding, which forces plants to compete for resources and can hinder plants’ ability to thrive. When coupled with other technology, self-driving equipment can apply just the right amount of water, fertilizer, pesticides, herbicides, and other inputs. More efficient passes even means less fuel is used. This efficiency not only helps the farmer’s bottom line but also helps use resources appropriately and responsibly.

It’s kind of a no-brainer that making maximum use of the land and creating a perfect environment for each plant to thrive would lead to more productivity. But when a farmer and his equipment can all communicate in real-time, it allows the equipment to work together and be more productive. Perhaps even more importantly, farmers can essentially be in two places at one time, coordinating multiple pieces of equipment and freeing up time to tackle other tasks.

Operating farm equipment can be a dangerous job, so safety is something farmers take very seriously. Self-driving equipment makes it safer to work in low visibility conditions like rain, fog, dust, and darkness—which can be common conditions on the farm. Nobody likes to drive tired, but during busy times farmers are often forced to work long hours early in the morning and late into the night. Equipment that drives itself reduces operator fatigue and helps eliminate mistakes.

This technology has the ability to improve even more, and just earlier this year Autonomous Solutions, Inc. and CNH Industrial unveiled a fully autonomous concept at the Farm Progress Show. ASI and CNH partnered with Case IH and New Holland for the prototypes, and . . . they’re pretty awesome. Check it out for yourself:

Today’s farmers have a lot of challenges to overcome. They have to find ways to feed and clothe a rapidly growing population, increasing production while using resources and inputs responsibly. Self-driving tractors, like other aspects of precision agriculture, provide farmers the tools to tackle those challenges.

Self-driving tractors and data science: we visit a modern farm

This tractor drives itself