Growing up on our small farm in Travis County, Texas, I would occasionally see the survey form from the Texas Crop and Livestock Reporting Service on my dad’s desk. Dad retired as a pilot from the US Air Force after a 28-year career, including flying B-29’s during WWII in the Pacific. My parents bought the rural house and acreage in central Texas so that, among other reasons, my two brothers and I could learn the lessons of hard work while they held down jobs off the farm. Little did I know at the time that I would one day be a “bureaucrat” sending out those survey forms to thousands of farmers across the nation. During my 32 ½ years working for USDA National Agriculture Statistics Service (formerly known as the Crop and Livestock Reporting Service), I have seen and measured firsthand the tremendous changes in agriculture – yet the reason for conducting agricultural statistics surveys really has not changed.

Without taking a great deal of time to recount the history of the Ag Statistics Service within USDA, I will tell you that President George Washington actually conducted the first agricultural survey in 1791, before we had an official USDA. President Washington’s purpose for collecting farm statistics from his home in northern Virginia was generally to quantify the primary industry in our country at the time, production agriculture. Tobacco and cotton were heavily exported from America to England, so this information was beneficial to both countries. In 1840, the first official numbers on US agriculture were collected and disseminated as part of the Commerce Department’s 10-Year Population Census – the first Census of Agriculture. In 1862, President Abraham Lincoln created the “People’s Department”, what today is known as USDA, including an entity to collect farm statistics.

From the earliest efforts to collect the basic information on US agriculture until today, a few principles still provide the foundation for having timely and accurate farm statistics:

USDA/NASS publishes a report showing the impact of Crop Production estimates on market prices, both on the day following the release of the report and a week later. Below is a summary of price reactions following the release of cotton, corn, soybean, and wheat production estimates over a 30-year period. Contrary to the perception of many farmers that prices always go down after the release of crop reports, in fact prices go up about the same number of times they go down, and by about the same amount. In the absence of official USDA statistics, would the same be true? I wouldn’t bet on it. Again, farmers need official estimates of crop and livestock supplies to have equal footing in the market. 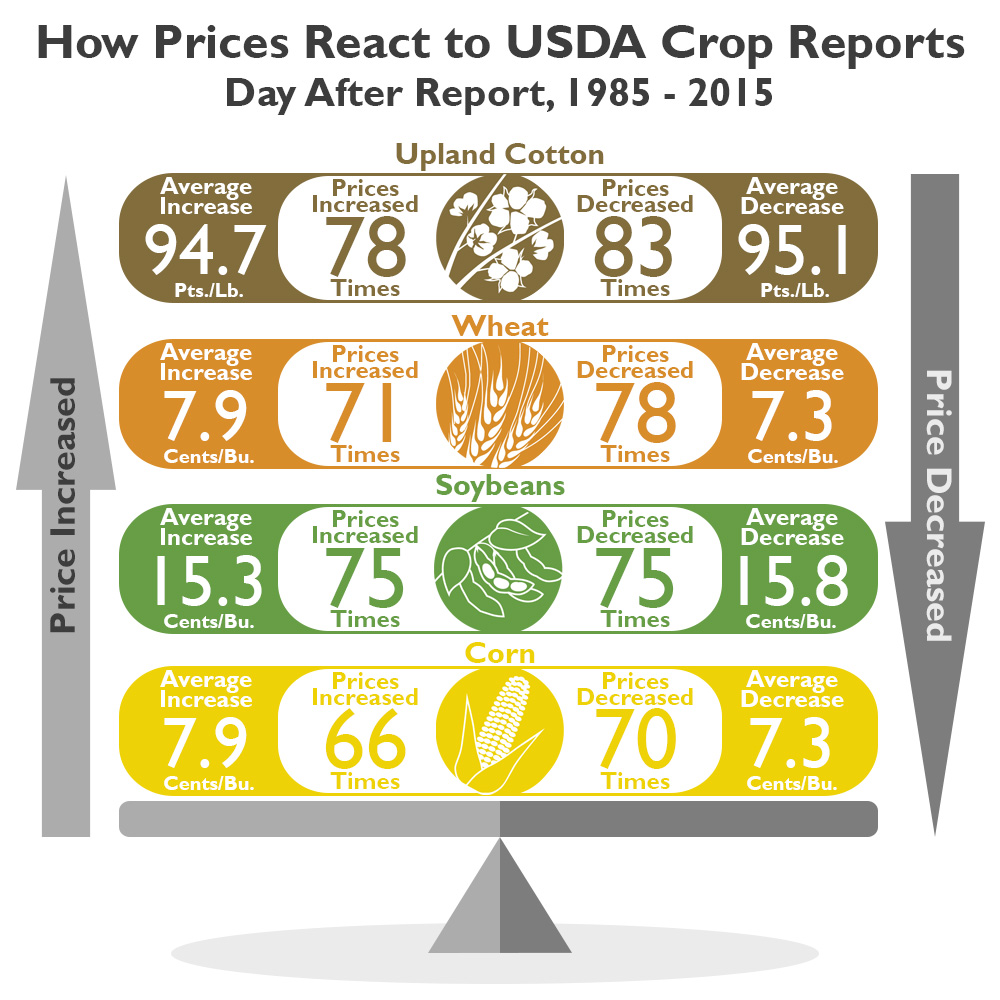 Finally, a parting message for any farmers reading this. Dee Webb and the staff at the North Carolina Ag Statistics Office are currently collecting final yield information for 2016 field crops. The importance of farmers reporting their yields to the statistics office cannot be overstated. Besides providing a basis for the size and scope of agricultural production at the county level—and ultimately documenting the economic importance of agriculture in each county and at the state level—the numbers are directly used to calculate county average yields. Accurate, individual reports of farm yields result in accurate county average yields. Because NASS county average yields are used in the determination of payments under the Agriculture Risk Coverage (ARC-County) program in the current farm bill, it is vitally important to cooperate on this and other surveys that you may be contacted on. Sometimes there are not enough reports in an individual county to statistically defend a county average yield. This may be due to insufficient acreage of a crop in that county, or more often, due to lower response rates from farmers contacted in the county. In either case, the result can impact the ARC-County payment determination, and often in a bad way for farmers in that county. So, again, this is why I say that farmers NEED and OWN the numbers – cooperating on ag surveys impacts you, the farmer. And besides the Farm Bill-authorized uses of NASS data, other programs (such as the specialty crops block grant program) use NASS estimates to allocate grant dollars to each state, and state extension office budgets use NASS farm numbers to help determine resource needs in each county.

Sometimes, it may seem that the NASS surveys are too frequent and burdensome; I remember my dad having similar concerns back in the 70’s. But I encourage you to work with the state statistics office to find a time that you can conveniently report on a survey. Remember: they are your numbers, and they are worth your time.

Note: USDA/NASS surveys have confidentiality protection of your individual farm numbers. Even though virtually all of NASS surveys are voluntary, except for the 5-year Census of Agriculture, your data cannot be released to anyone outside of NASS. Your farm data is used internally to aggregate to county, state, and national level estimates.